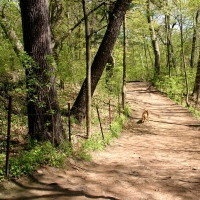 Humber Bay Park West is a narrow park jutting out into the water of Lake Ontario in the City's west end. It's a lovely place to have a picnic, take a walk or let your dog play in the dog off-leash area. It's also an excellent spot for bird watchers hoping to find interesting water fowl and shorebirds. Along the shores of Humber Bay West you'll also spot a wide variety of ducks overwintering in Lake Ontario. Combine your walk through Humber Bay Park West with a loop around Humber Bay Park East for a great day of hiking. A number of parking lots and paved pathways make this an accessible park.

This large, centrally located park is a jewel in Toronto's park system. High Park combines extensive natural areas with maintained parkland, recreational facilities and popular attractions for a unique urban park experience that can be enjoyed year-round. Recognized as one of the most significant natural sites within the City of Toronto, over one-third of the park remains in a natural state. High Park is home to many species of wildlife and contains an outstanding concentration of rare plant species.

In the farthest southwest corner of Toronto you will find Marie Curtis Park. This Park is a great destination for a day of fun with family and friends. It's named after the Longbranch Reeve (a small village Mayor) Marie Curtis and is one of the few beaches in North America named after a female community leader. This park was created in the late 1950's to help control flooding after Hurricane Hazel nearly swept local homes in the area out into Lake Ontario. Throughout this park you can find an abundance of wildlife and native plants. There is a playground, wading pool, a public swimming beach, a dog off-leash area, picnic spots and walking trails including a connection to the Waterfront Trail. You will always find something to do at Marie Curtis Park.

This park is located along a stretch of wooded shoreline in the Kipling and Lakeshore area. It is home to a variety of plants, trees, birds and other wildlife, as well as a network of paths and the city's first ice skating trail (in a figure-eight shape). The pleasure ice skating trail is located next to the Power House Recreation Centre (65 Colonel Samuel Smith Park Road). The park also features a dog off-leash area.

Sunnyside's western section, from the Humber River to west of the Bathing Pavilion is named in honour of Casimir Gzowski, a pioneer engineer in the building of railways in Canada. The park houses a monument built in the 1960s that has displays of his personal history. The park contains a children's playground and picnicking areas, a food concession stand and a storm water catchment pond. At the western end of Gzowski Park is the Queen Elizabeth Way Monument, relocated from its location between the east and west lanes of the then Queen Elizabeth Way, which had its starting point from the Humber River. The monument was relocated to the park and rededicated by Queen Elizabeth in 1989. The park is now the site of another relocation, a Joy Oil heritage gas station from the 1930s. It has been moved from its original location north of Lake Shore Boulevard to the south side at the intersection with Ellis Avenue.

Kings Mill Park, located south of Bloor Street West and the Old Mill Subway Station Eastbound Platform, is one of a chain of parks along the Humber River leading to Lake Ontario. King's Mill is the original name of the Old Mill at the north end of the park. It's an excellent park for hiking, biking and bird watching. You can also reward your dog after a good long hike with a chance to play with friends in the dog off-leash area. Whether you want to have a picnic or just take a stroll along the banks of the Humber River, this park is a great spot to refresh and renew. Kings Mill Park is also a part of the Humber River, Old Mill and Marshes Discovery Walk.